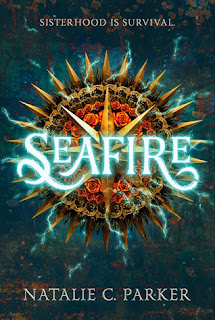 I received an ARC of Seafire from my library's summer reading program.

After her family is killed by corrupt warlord Aric Athair and his bloodthirsty army of Bullets, Caledonia Styx is left to chart her own course on the dangerous and deadly seas. She captains her ship, the Mors Navis, with a crew of girls and women just like her, who have lost their families and homes because of Aric and his men. The crew has one mission: stay alive, and take down Aric's armed and armored fleet.

But when Caledonia's best friend and second-in-command barely survives an attack thanks to help from a Bullet looking to defect, Caledonia finds herself questioning whether to let him join their crew. Is this boy the key to taking down Aric Athair once and for all . . . or will he threaten everything the women of the Mors Navis have worked for?

If you like this you may also enjoy the Daughter of the Pirate King duology.

Caledonia tries to make up for a mistake she made at 14 by living with very strict rules for her and her all female crew. Caledonia believed a Bullet which cost her and her bestie's families' ship and crew to die. Four years later, and a new crew/ family of 52 ladies everyone knows: Never trust a Bullet.

Aric Athair commands a mostly male fleet calling his henchmen Bullets, insuring loyalty and aggressiveness by keeping them doped up on Silt after stealing them from their families. Each one of the Mors Navis crew has lost loved one to Aric's tyranny so they decide to fight back every chance they get attacking one ship at a time leaving as many Bullets dead as they can.

During one raid Pisces, Caledonia's long time friend and 2nd in command, gets captured and saved by a Bullet that turned against his crew. Pisces brought the Bullet, Oran, aboard with her in hopes of changing the mission. Maybe they can detox and save some Bullets or find their brothers? Friendship and loyalty is tested.

On the water in a futuristic dystopian setting. There was reference to 'Old World' tech but not a lot of information on what happened.

Revenge and loyalty. There was a lot of us vs them, and all of them are bad.

Does this frustrate you in books as well? Leave me a comment about your book pet peeves!

If you are looking for an all female pirate crew - maybe read Daughter of the Pirate King duology first. I just realized this is going to be a trilogy which means the series won't be complete for YEARS. I hate when that happens. Although I enjoyed the book, I don't think I'm going to care about it still in 2020.

Disclosure: This paperback book was provided to me for free from my local library. Whether positive or negative, my blog review is my own and may differ from others opinions. This review is simply a compilation of my thoughts and opinions of this book.  If you have any questions, just post them and I'll be happy to answer as best as I can. This disclosure is in accordance with the Federal Trade Commission 16 CFR, Part 255: “Guides Concerning the Use of Endorsements and Testimonials in Advertising.”
**No monetary compensation was received for this review. Posts may contain affiliate or referral links. Thank you for your support!**
Posted by Angela Walker's Reviews at 9:15 AM