A love worth fighting for. A dream worth dying for. An ending worth waiting for.

With lives, empires, and hearts hanging in the balance, Tella must decide if she’s going to trust Legend or a former enemy. After uncovering a secret that upends her life, Scarlett will need to do the impossible. And Legend has a choice to make that will forever change and define him.
Caraval is over, but perhaps the greatest game of all has begun. There are no spectators this time—only those who will win, and those who will lose everything.

Welcome, welcome to Finale. All games must come to an end…

Dragna sisters both have a POV in this final book. Two months have passed since the last Caraval. Tella is dutifully sitting by her mother's (Paloma) side waiting for her to wake up and talking to Legend nightly in her dreams. While all of the kingdom mourns their Empress Elantine's death, Scarlet counts down the days until she can finally meet her former betrothed Nicolas while missing an absent Julian. In other parts the Fates are waking up and coming back into their powers. Fates can be cruel. When innocent people start to be tormented or die both sisters try to find ways to stop them one way or another. 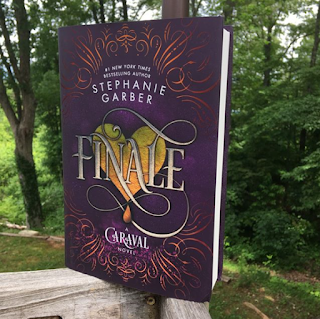 Tella has mommy issues, really both of the girls do. I liked getting to know some of their back story and complicated feelings about Paloma. What happens in the past, effecting the future, contaminating the present with all the feels- just so well done.

Jacks- I know he's not a good guy, and shady as all get, but he's consistent and I love this character.

Speaking of Fates, I liked getting to know some of the other ones. The magic, what drives them, weakness, dynamics. I can only imagine being immortal, having so much experience and getting frustrated when others don't take my advice.

Scarlet's dress- can I please have a mood changing dress that's always immaculate and on point? PLEASE? I'll share a secret, or give up a dream, or whatever the cost is. #worthit

I wish the Count had some more plot line or was absent all together. I feel like that could've been something but it ended up being nothing rather quickly. Honestly, when Scarlet proposed a game to win her hand I thought it really would be a Caraval game. Disappointed that ended up being a flop- it could've been ultimately completely taken out.

If love is supposed to conquer all, why is it such a problem? The back and forth between settling or being doomed was a little annoying. I don't think I would've minded so much if there wasn't so much repetition. Tella's revelations were good sometimes but so angsty.

So, really, what did Tella get for winning Caraval? I feel like I missed that

***SPOILER***  If Legend gives up his immortality for love, doesn't that mean he relinquishes his magic too? Just asking, because what about the unborn future daughter?

If you have already read the first two Caraval books, might as well finish the series. There is love, loss, and magic. Everything I've loved about the series with a satisfying conclusion.

Posted by Angela Walker's Reviews at 12:00 AM No comments:

I received a copy of this novel from a Goodreads giveaway earlier this year. All opinions are my own, any review is voluntary.

Young Emmett Farmer is working in the fields when a strange letter arrives summoning him away from his family. He is to begin an apprenticeship as a Bookbinder—a vocation that arouses fear, superstition, and prejudice among their small community but one neither he nor his parents can afford to refuse.

For as long as he can recall, Emmett has been drawn to books, even though they are strictly forbidden. Bookbinding is a sacred calling, Seredith informs her new apprentice, and he is a binder born. Under the old woman’s watchful eye, Emmett learns to hand-craft the elegant leather-bound volumes. Within each one they will capture something unique and extraordinary: a memory. If there’s something you want to forget, a binder can help. If there’s something you need to erase, they can assist. Within the pages of the books they create, secrets are concealed and the past is locked away. In a vault under his mentor’s workshop, rows upon rows of books are meticulously stored.

But while Seredith is an artisan, there are others of their kind, avaricious and amoral tradesman who use their talents for dark ends—and just as Emmett begins to settle into his new circumstances, he makes an astonishing discovery: one of the books has his name on it. Soon, everything he thought he understood about his life will be dramatically rewritten.

There are three parts in the book. Part one is Emmett's current story, living on a farm and being chosen to become a binder apprentice. While on the farm Emmett has a sickness that makes him weak 'Binder's Fever'. He also loses time and can't complete the tasks he used to do easily. When he arrives at the Binder's workshop Seredith refuses to tell him how to bind, or what exactly they do but instead focuses on the art of creating books and developing a respect for the process. There is a lot of superstition and mistrust of binders but everyone agrees they are something of a healer also. Part two Emmett finds out he had previously been bound and regains his missing story. Part three is told from Lucian's POV back to current timeline after Emmett regains his memories. 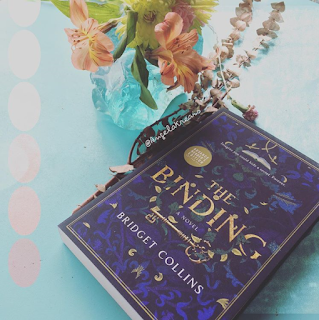 Pretty Cover- I like the colors, the deckled edges! Also, that description made me really want to read the story.

The first 150 pages, part 1 of 3, tells the story about Emmett Farmer and how he becomes an apprentice Binder. There is mystery and world building and it totally kept me wanting to know what happened. The idea to willingly give up memories and to never be able to be reminded of what you want to forget- sounds like a great idea. Memories were kept transcribed in books and kept in safekeeping. If the book is destroyed, the narrator remembers their story.

THIS IS A LOVE STORY- second part of the book was the love story between Emmett and his friend that ended in disaster. 130 pages of queer friends to taboo lovers. That's the big reveal, the twist. I didn't want to read it. As soon as you start reading the relationship develop I knew what the author was going to do but hoped I was wrong. There is so much that could've been done in this part to enhance the story, move it along, continuing building the world, but no, we get a love story instead. I didn't realize that was the whole plot- I feel like I got hoodwinked.

“There's a growing trade in fakes, you know. Does that concern you? He paused, but he didn't seem surprised not to get an answer. I've never seen one - well, as far as I know - but I'm curious. Could one really tell the difference? Novels, they call them. They must be much cheaper to produce. You can copy them, you see. use the same story over and over, and as long as you're careful how you sell them, you can get away with it. It makes one wonder who would write them. People who enjoy imagining misery, I suppose. People who have no scruples about dishonesty. People who can spend days writing a long sad lie without going insane.”

I don't know what took me so long to pick up this book. I actually was excited to get an ARC and the cover is so pretty and the synopsis intriguing... but now I wish I would've passed. It was so slow and more queer magical realism than the fantasy I was expecting. The first part had so much potential.
Rating: 2/★★★★★
based off Goodreads' ratings: 2 stars – it was OK. Not really impressed. I probably finished reading the book (wishing I hadn't). I was hoping for more or wanting something different.

Disclosure: This book was provided to me at no cost. I won a Goodreads giveaway. Whether positive or negative, my blog review is my own and may differ from others opinions. This review is simply a compilation of my thoughts and opinions of this book.  If you have any questions, just post them and I'll be happy to answer as best as I can. This disclosure is in accordance with the Federal Trade Commission 16 CFR, Part 255: “Guides Concerning the Use of Endorsements and Testimonials in Advertising.”
**No monetary compensation was received for this review. Posts may contain affiliate or referral links. Thank you for your support!**

Posted by Angela Walker's Reviews at 3:30 AM No comments:


Posted by Angela Walker's Reviews at 12:00 AM No comments:

COVER REVEAL for Brand of Light by Ronie Kendig

So excited to help reveal Ronie Kendig's BRAND OF LIGHT, the first book in her space opera trilogy, The Droseran Saga, releasing from Enclave Publishing in December 2019. This is a LIMITED EDITION hardcover you can't miss!

There's a price on her head, and it has everything to do with the brand on her arm.
Tertian Space Command has blessed every planet in the quadrants with high technology, save one: Drosero. But in spite of their tenuous treaty with the ruling clans, TSC has plans for the backward planet. And they're not alone.

After a catastrophic explosion, Kersei Dragoumis awakens in a derelict shuttle, alone, injured, and ignorant of the forbidden technology that has swept her into a nightmare. The brand she's borne since childhood burns mysteriously, but the pain is nothing to that when she learns her family is dead and she is accused of their murders.

Across the quadrants, Marco Dusan responds to the call of a holy order-not to join them, but to seek a bounty. Gifted-or cursed-with abilities that mark him a Kynigos, a tracker sworn to bring interplanetary fugitives to justice, Marco discovers this particular bounty has nothing to do with justice and everything to do with prophecy. One that involves the hunter as much as the hunted. 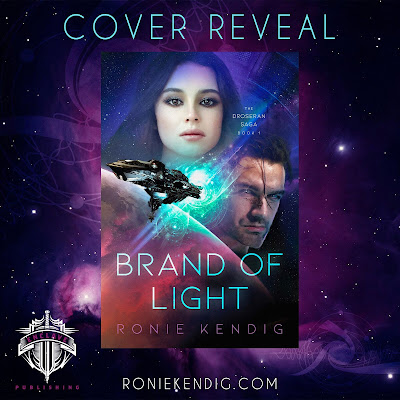 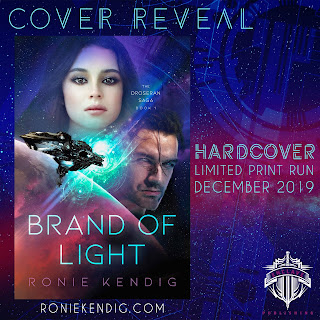 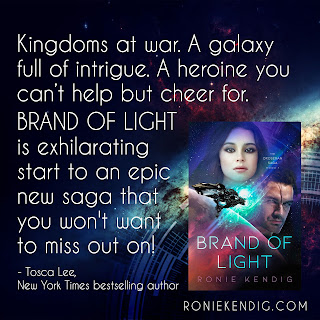 Posted by Angela Walker's Reviews at 12:00 AM No comments: