Title: Spin the Dawn
Series:  The Blood of the Stars, book 1

Project Runway meets Mulan in this sweeping YA fantasy about a young girl who poses as a boy to compete for the role of imperial tailor and embarks on an impossible journey to sew three magic dresses, from the sun, the moon, and the stars.

Maia Tamarin dreams of becoming the greatest tailor in the land, but as a girl, the best she can hope for is to marry well. When a royal messenger summons her ailing father, once a tailor of renown, to court, Maia poses as a boy and takes his place. She knows her life is forfeit if her secret is discovered, but she'll take that risk to achieve her dream and save her family from ruin. There's just one catch: Maia is one of twelve tailors vying for the job.

Backstabbing and lies run rampant as the tailors compete in challenges to prove their artistry and skill. Maia's task is further complicated when she draws the attention of the court magician, Edan, whose piercing eyes seem to see straight through her disguise.

And nothing could have prepared her for the final challenge: to sew three magic gowns for the emperor's reluctant bride-to-be, from the laughter of the sun, the tears of the moon, and the blood of stars. With this impossible task before her, she embarks on a journey to the far reaches of the kingdom, seeking the sun, the moon, and the stars, and finding more than she ever could have imagined.

Steeped in Chinese culture, sizzling with forbidden romance, and shimmering with magic, this young adult fantasy is pitch-perfect for fans of Sarah J. Maas or Renée Ahdieh.

Maia wins a contest to be Imperial Tailor after dressing like her brother Keton and running away to the palace to compete for the honored position in her father's place. The kingdom has been in a long war with many casualties, including two of Maia's brothers. The promise of a marriage between Lady Sarnai and the Emperor is the only thing that has brought peace to the land. When Maia won the contest Lady Sarnai gave her an impossible task; create the three dresses of Amana, the mother goddess. Maia went on a quest to capture the laughter of the sun, the tears of the moon, and the blood of the stars.

Excerpt
"Perhaps you know the legend of the god of thieves?" she asked. "He was so skilled he boasted that he could steal Amana's children: the sun, the moon, and the stars. The gods laughed at him, but he was undeterred. He captured the first two of Amana's children easily, but the stars- they danced in the sky and were difficult to catch. So he shot arrows into them, and caught their essence as they bled into the sky. Amana was so enraged that she buried the world in darkness. Even when the god of thieves gave back what he had stolen, she was not appeased.

"So he called upon Heaven's tailor to make Amanda a gift. He had kept slivers of the sun, the moon, and the stars, and he asked the tailor to make three dresses so beautiful they blinded the mortal eye. The tailor succeeded. The dresses were so dazzling Amana forgave the thief and returned light to the world, but only for half the day- for the fragments the thief had given to make the dresses meant the day could never be whole again. A lesson never to anger the mother goddess."

Lady Sarnai paused no, and her red lips formed a dangerous smile. "You are the best tailor in A'landi, Master Tamarin,. Make me the dresses of Amana."

Starts off in Port Kamalan in the home of the Tamarin family in the magical land of A'landi. A'landi has been in a civil war for several years with a warlord. 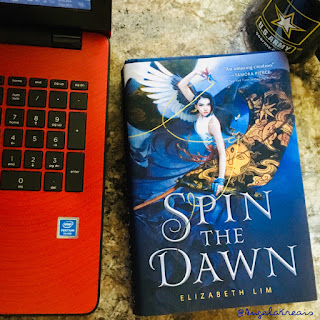 Epic quest to save the land/family. Magic, creativity, sewing.

I am not a creative person. The main character, Maia learned how to sew before she could walk. She's a savant with a needle and thread in a time where women are lesser and not known for their works. Her only hope of continuing her passion for sewing is to either 1) never marry and always work in her father's shop 2) marry another tailor or 3) win this competition pretending to be a man and hope no one notices otherwise. I wish I had half as much talent as Maia possesses, I feel like that's an important life skill lost to me.

The cover is cool- its what caught my eye initially- but the naked cover is stamped with a sun/moon symbol. I'm a total sucker for pretty naked covers!

There is a map. Thanks to Instagram that's one thing I pay attention to now. Seeing a new land plus all the secret bonus topography that makes more sense as you read the book. I love them, and this one is beautiful.

Magic. Fantasy is definitely my favorite genre and this delivers. Not everyone has magic and most that do are confined to temporary illusions. Enchanters with more magic ability comes with a greater cost, like slavery to a master for a set LONG period of time. Some reviews mention Aladdin elements, this and a magic carpet ride are the two main nods. Maia has a pair of magic scissors. By herself, Maia is gifted with needlework from years of honing her craft. With the scissors, Maia is faster and her natural ability is amplified. Plus they give her the ability to work with magical elements, like the rays of sunlight.

Romance. Circumstance brought Maia and Edan, her traveling companion/ protector, together and they slowly developed respect and romantic feelings. They were on a quest. There was danger. They were alone. The relationship doesn't feel rushed or forced, it was well written.

The story as a whole felt very familiar. There wasn't anything really surprising and it was the ideas of several well known other stories combined together so it didn't feel as fresh or as exciting as I would've liked.

This is book 1. There will be a sequel. There is no happily ever after (actually Maia gets her wish of saying goodbye and one more moment of happiness, so kind of?) and I'm okay with that. Why can't a sacrifice end a perfectly fine story? You accomplished your goal, you made a choice with full knowledge of the consequences, you live with your actions. That's life and I'd be satisfied with that. Instead I have to decide next year (or whenever the sequel comes out) if I want to continue.

I listened to the audiobook and followed along some with my hardcover copy. The audiobook was average but I imagine its hard to top January LaVoy so that may not be fair.

The story is decent but feels super familiar. I'd probably wait until the series is complete and the binge instead of picking this up now.

Would Read More from Author?  yes
Recommend To – fans of stories about women overcoming sexism
Rating: 3/★★★★★
based off Goodreads' ratings: 3 stars – liked it, average read. The story was what I was expecting.