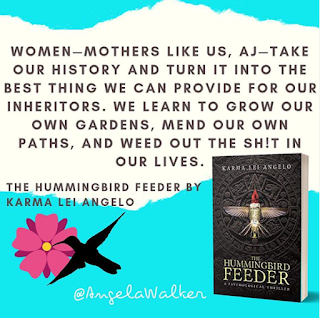 I purchased this ebook for free on the release day on Amazon. All opinions are my own, any review is voluntary.

The Hummingbird Feeder: a psychological thriller by Karma Angelo
My rating: 4 of 5 stars

View all my reviews

It’s Ameena “AJ” Jardine’s first day on the job. Before she and another new hire can finish orientation, they’re pulled to help with a highly important case. Long-buried memories force their way to the surface, memories she’s not ready to share or face.

Deputy Director Conrad McMillan is forced to recruit two of his new hires for a sensitive case after a man is found tangled in barbed wire, his neck slit from ear to ear. Conrad knows AJ, but he’s not prepared or ready to tell her how.

Amanda Claremont, a successful businesswoman who runs her own nursery and farm, is psychologically infatuated with hummingbirds, ancient cultures...and AJ. She can’t wait to share her darkest secrets and play mind games with the budding detective.

Told from different perspectives, discover who the ultimate hummingbird feeder is in this cleverly woven story which slowly climaxes into an ending you won't see coming. 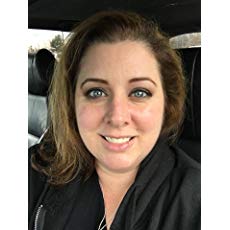 Karma Lei Angelo was born in Arlington, Texas, the first and only daughter of a Lebanese immigrant father and American mother. She spent the first four years of her life in Arlington, and then the family moved overseas to Lebanon to be with her father’s family.

It was her daughter’s interest in The X-Files and in becoming an FBI agent when she grows up which planted the idea for the Fibonacci Series and Fasciata story. Along with THE JARDINE TRILOGY, Karma has outlined several other books which will delve deeper into the simple and complex universe surrounding the Fasciata Order and the characters involved.

The Hummingbird Feeder is Amanda Claremont, known in town for being eccentric, a shrewd business woman, and a strong influence in the community. When one of her employees are found with his throat slit Deputy Director Conrad McMillan takes the case enlisting two new detectives not finished with orientation to help. Amanda takes an interest in detective AJ during their initial interview. Its AJ's job to indulge the woman her stories to keep the investigation going smoothly after Amanda requested her specifically to share her personal history and background related to case.

"It was a primal stare, like someone ready to fight to the death for what they wanted. He wondered if that was the same look a hummingbird gave another, protecting what it cherished most, ready to kill if needed." 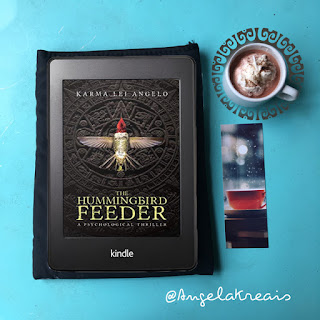 
"Death is the pause before life picks up again. Death has the ultimate control over time as everything around you slows down to an idling murmur. Elapsing ticks and tocks cease. Death allows you to take a breath from the running, to stop and look at the space around you. It allows you to re-evaluate your priorities. Death changes you in ways you don’t think possible."

First off, the author mentioned me in the Acknowledgements section! 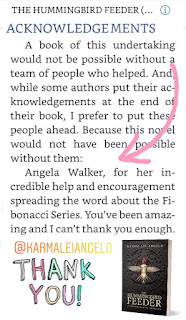 the Cover! It has like an ancient Aztec symbol in the background and a dead hummingbird on it. Super cool looking and ties in well with the storyline.

Short chapters- there are 89 chapters! That is plenty enough to be able to say 'I'll start/finish/do whatever when I'm done with this chapter'. My husband and children can attest I say that frequently enough.

Designs at start of chapters. I wish I knew more about the designs like why the author chose to create a hummingbird design with an infinity symbol or what the inspiration was to having the design more around the chapters.  Regardless, I love it. Each chapter either has a bird in flight or a flower symbol: 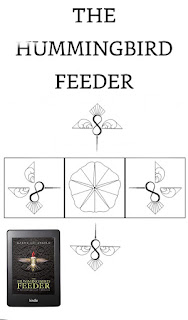 Appendices in the back of the book (A-H). You can tell a lot of thought was put into this story. With a diverse cast of characters and names I appreciate there are some descriptions on name pronouncing (like Eoghan = Ee-un) because I would've never pronounced that correctly on my own. Also Arabic phrases and pronunciations. I should reach out to Karma Lei Angelo and ask for a visual post of the Hummingbird Warriors. That would be great to look further into.

The Hummingbird Feeder started off with action and then goes back four days earlier. Definitely had me intrigued right at the start of the book. I didn't understand the cryptic phone conversation but it made me want to know what in the world is going on.

Throughout the novel AJ is dealing with some PTSD which is wonderfully captured in her mannerisms, outburst, and confessions. She quit her previous job, moved across country, and switched careers- basically a hot mess and her psych eval shows it. She's a widow and single mother of two children but is determined to take advantage of her fresh start. With the development of AJ's past we learn there is a mystery connection between the deputy director and AJ. I hoped I would get to know what that connection fully is but that story was never told.

Hummingbird folklore- This is actually going to go in both sections: what I liked and did not like about the book. I learned a lot about hummingbirds from this story, some of which I did a quick google search to see if the information was true or part of the fiction story line. Did you know hummingbirds are only found in the western hemisphere? The Hummingbird Warriors made of the story.

There were a few clerical errors. That happens sometimes, but I don't like reading something getting confused and realizing it was most likely supposed to say something else. This is a self published book which is amazing.

Slow pacing- The story started off with action that got me excited and then it didn't reappear again until the end of the book. It wasn't foreshadowing, it was the ending so when I got to the end I wasn't surprised. We're told who the antagonist is in chapter one but it takes the entire book for her to be crazy. Along the way we pick up stories about her birdies and how she got successful. Its very dialogue heavy, that's the entire story. I think it may have been better to have two distinct timelines: starting with Amanda's marriage and her journey as told to AJ through the interview process but also present with AJ doing some of the investigative work.

So much information- I appreciate learning about hummingbirds and folklore but it was a lot. I pictured myself sitting with an older lady telling a story with so many details and internally groaning to myself wanting her to just get to the point. I'm sure we've all been in that situation, my husband says I'm like that every time I leave a voicemail, but that's not my favorite way to read a book.

Awkward pet names- At the end of chapter one Amanda hangs up her call with the detective saying "Goodbye my White--Whiskered Hermit. Give Tony, my wonderful White-necked Jacobin, my regards." By the end of the story I understood better but in the beginning I cringed a little reading that line.

Unclear what order I should read the books in. I have the Jardine trilogy sitting on my bookshelf but I still haven't read them. I believe this can be read as a stand-alone but I'm not sure if it would be beneficial to read the trilogy first. I believe this is set early in time then the trilogy though so I read this when it was released.

I read the book fairly quickly and it has an interesting plot. Don't go in expecting some huge plot twist, because there isn't one but I did connect with the main characters.
Reason for Reading – new release and I've been eyeing the author's other books for a year.
Story – 4 out of 5 Stars
Romance – 0 out of 5 Stars - there was none (totally ok with me)
Drama – 2 out of 5 Stars - it was all saved for the end
Writing – 4 out of 5 Stars - well researched with some clerical error
Content Flow – 5 out of 5 Stars - clear progression
Would Read More from Author? Definitely
Recommend To – anyone that wants to support self published authors and who like stories told within a novel

"I’m drawn to you, like you’re another one of my flowers."

Rating: 4/★★★★★
based off Goodreads' ratings: 4 stars – really liked it, really enjoyable. Definitely recommend and I like seeing it on my bookshelf or lending it out to friends.