The Darkest Part of the Forest REVIEW 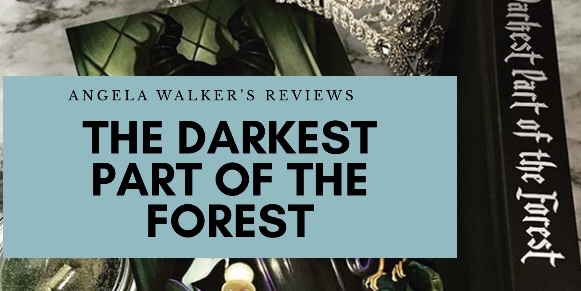 The Darkest Part of the Forest

Reason for Reading – another book I've had on my shelf forever that I'm finally getting around to reading. My kids read this YEARS ago and wanted me to, now I am. Borrowed the audiobook from my local library via Overdrive.

Children can have a cruel, absolute sense of justice. Children can kill a monster and feel quite proud of themselves. A girl can look at her brother and believe they’re destined to be a knight and a bard who battle evil. She can believe she’s found the thing she’s been made for.

Hazel lives with her brother, Ben, in the strange town of Fairfold where humans and fae exist side by side. The faeries’ seemingly harmless magic attracts tourists, but Hazel knows how dangerous they can be, and she knows how to stop them. Or she did, once.

At the center of it all, there is a glass coffin in the woods. It rests right on the ground and in it sleeps a boy with horns on his head and ears as pointed as knives. Hazel and Ben were both in love with him as children. The boy has slept there for generations, never waking.

Until one day, he does…

As the world turns upside down, Hazel tries to remember her years pretending to be a knight. But swept up in new love, shifting loyalties, and the fresh sting of betrayal, will it be enough?

Down a path worn into the woods, past a stream and a hollowed-out log full of pill bugs and termites, was a glass coffin. It rested right on the ground, and in it slept a boy with horns on his head and ears as pointed as knives.

He didn’t wake up during the long summers, when Hazel and her brother, Ben, stretched out on the full length of the coffin, staring down through the crystalline panes, fogging them up with their breath, and scheming glorious schemes. He didn’t wake up when tourists came to gape or debunkers came to swear he wasn’t real. He didn’t wake up on autumn weekends, when girls danced right on top of him, gyrating to the tinny sounds coming from nearby iPod speakers, didn’t notice when Leonie Wallace lifted her beer high over her head, as if she were saluting the whole haunted forest. He didn’t so much as stir when Ben’s best friend, Jack Gordon, wrote in case of emergency, break glass in Sharpie along one side—or when Lloyd Lindblad took a sledgehammer and actually tried. No matter how many parties had been held around the horned boy—generations of parties, so that the grass sparkled with decades of broken bottles in green and amber, so that the bushes shone with crushed aluminum cans in silver and gold and rust—and no matter what happened at those parties, nothing could wake the boy inside the glass coffin.

When they were little, Ben and Hazel made him flower crowns and told him stories about how they would rescue him. Back then, they were going to save everyone who needed saving in Fairfold. Once Hazel got older, though, she mostly visited the coffin only at night, in crowds, but she still felt something tighten in her chest when she looked down at the boy’s strange and beautiful face.
She hadn’t saved him, and she hadn’t saved Fairfold, either.

Excerpted from The Darkest Part of the Forest © Holly Black, 2015

Magical place of Fairfold where people come to gawk at the faeries living among the humans. 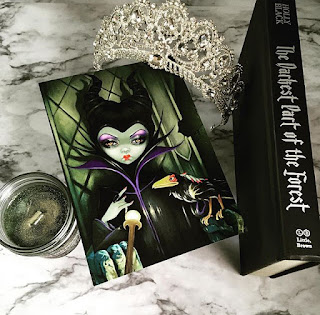 wicked faeries and rules of Elfhame

Would you encourage others to read this book? sure if you are a fan of this author
Would Read More from Author? Definitely

based off Goodreads' ratings: 4 stars – really liked it, really enjoyable. Definitely recommend and I like seeing it on my bookshelf or lending it out to friends.