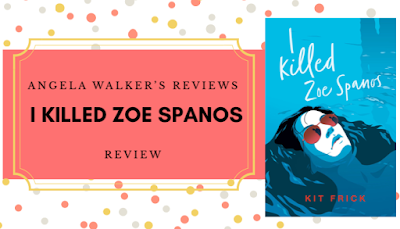 Reason for Reading – I was contacted by the author to be an early reviewer. Previously read and reviewed See All The Stars and did an Author Interview. I received a copy of this novel from the publisher via Edelweiss. All opinions are my own, any review is voluntary.

When Anna Cicconi arrives in the small Hamptons village of Herron Mills for a summer nanny gig, she has high hopes for a fresh start. What she finds instead is a community on edge after the disappearance of Zoe Spanos, a local girl who has been missing since New Year’s Eve. Anna bears an eerie resemblance to Zoe, and her mere presence in town stirs up still-raw feelings about the unsolved case. As Anna delves deeper into the mystery, stepping further and further into Zoe’s life, she becomes increasingly convinced that she and Zoe are connected—and that she knows what happened on New Year’s.

Two months later, Zoe’s body is found in a nearby lake, and Anna is charged with manslaughter. But Anna’s confession’s is riddled with holes, and Martina Green, teen host of the Missing Zoe podcast, isn’t satisfied. Did Anna really kill Zoe? And if not, can Martina’s podcast uncover the truth?
Inspired by Serial and Daphne du Maurier's Rebecca, this thrilling story of psychological suspense is told in three interwoven timelines, including the transcript of a fictionalized true crime podcast.


Party girl goes to the Hamptons

for a nanny gig and regular access to the beach

Anna is a teenager with an absent parent who parties too much. The summer before heading to college she's determined to be a better person so she gets a job away from the city as a nanny for a wealthy hard working family. Once at the beach side village she finds out she looks real similar to Zoe, a girl that has been missing since New Year's Eve. Every where Anna turns she finds herself connected to the missing girl.

Told from Anna's POV in two timelines: after she confessed to killing Zoe and before she came to Herron Mills. There are also written transcripts of the Podcast episodes of Missing Zoe and Martina's POV on her quest for truth. "The voice coming from behind the camera is female, but it's not kind or nurturing or any of those attributes we assign to women like a requirement or curse."

"She has grown accustomed to her mother's display of hollow disinterest in her failures."

There are different media formats that remind me a little of Sadie by Courtney Summers (read my review for Sadie HERE). One of the POVs is Martina who's written transcript of her podcast episodes are included. I don't actually listen to podcasts but I can imagine it and I bet I Killed Zoe Spanos would do well as an audiobook.

I love a good mystery, its been a favorite genre for me this year. The whole time I was trying to figure out what happened on New Year's Eve and never guessed. The obvious mystery repeated over and again I thought nothing of so at the end I did not expect that plot twist either.

The setting, unreliable narrator, and everyone trying to figure out the truth from fiction was all so well written! With Anna being mistaken for Zoe so frequently, at first I thought maybe Anna and Zoe were somehow the same person. (I concocted several theories how that could be possible) I'm glad the author mentions they are different ages with different eye colors.

Recommend To – anyone that likes a cozy murder myster/beach read

Would you encourage others to read this book? If you liked Sadie- you'll love this.
Would Read More from Author? Definitely

I Killed Zoe Spanos by Kit Frick
My rating: 5 of 5 stars

View all my reviews
based off Goodreads' ratings:
5 stars – LOVE, it was amazing, highly recommend.

I am a participant in the Amazon Services LLC Associates Program, an affiliate advertising program designed to provide a means for sites to earn advertising fees by advertising and linking to Amazon.com. As an Amazon Associate I can earn from qualifying purchases.
Disclosure: This book was provided to me at no cost. Whether positive or negative, my blog review is my own and may differ from others opinions. This review is simply a compilation of my thoughts and opinions of this book.  If you have any questions, just post them and I'll be happy to answer as best as I can. This disclosure is in accordance with the Federal Trade Commission 16 CFR, Part 255: “Guides Concerning the Use of Endorsements and Testimonials in Advertising.”
**No monetary compensation was received for this review. Posts may contain affiliate or referral links. Thank you for your support!**
Posted by Angela Walker's Reviews at 12:00 AM No comments: Links to this post 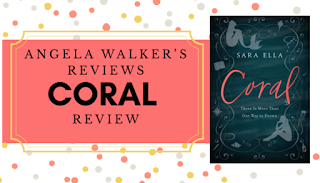 BOOK LINKS: Goodreads | Amazon |  #CommissionsEarned
Reason for Reading – received from being part of Just Read Tour  I received a copy of this novel from the publisher. All opinions are my own, any review is voluntary.

There is more than one way to drown.

Coral has always been different, standing out from her mermaid sisters in a society where blending in is key. Worse yet, she fears she has been afflicted with the dreaded Disease, said to be carried by humans—emotions. Can she face the darkness long enough to surface in the light?

Above the sea, Brooke has nothing left to give. Depression and anxiety have left her feeling isolated. Forgotten. The only thing she can rely on is the numbness she finds within the cool and comforting ocean waves. If only she weren’t stuck at Fathoms—a new group therapy home that promises a second chance at life. But what’s the point of living if her soul is destined to bleed?

Merrick may be San Francisco’s golden boy, but he wants nothing more than to escape his controlling father. When his younger sister’s suicide attempt sends Merrick to his breaking point, escape becomes the only option. If he can find their mom, everything will be made right again—right?

When their worlds collide, all three will do whatever it takes to survive, and Coral might even catch a prince in the process. But what—and who—must they leave behind for life to finally begin?

Taking a new twist on Hans Christian Andersen’s beloved—yet tragic—fairy tale, Coral explores mental health from multiple perspectives, questioning what it means to be human in a world where humanity often seems lost. 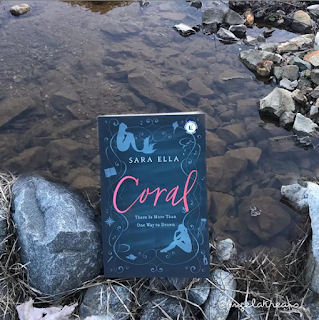 * taken from Goodreads from the author

Trigger Warning & A Note to My Readers:
(*You will find this note at the beginning of this book as well.*)
For my friends who have experienced trauma, a warning—this story may be triggering. I have done my best to approach the mental health topics addressed in this book in the most sensitive and caring way possible. But even all the research and sensitivity readers in the world would never make it so I could approach every aspect of mental health from every perspective. Your experience is unique to you.

With that said, while some of what I have written comes from research and some from the caring eyes of sensitivity readers who have lived through many of these experiences, other pieces come from my own personal experience with emotional trauma. If you have lost a loved one, I’m with you. If you face depression or anxiety, my heart aches with you in a truly personal way. If you have ever felt misunderstood for these things or simply wanted to escape altogether—I understand.
For the girl who is not okay. For the boy who wonders if it will ever get better. This story is for you.
My hope is that Coral’s tale may be a small pinprick of light in your darkness—a reminder that you are seen. You are loved. You are not alone. You are not nothing, my friend. And neither am I.
Sincerely,
Sara Ella

This is a dark Little Mermaid retelling that covers tough topics (read author's content warning). The three main characters have POVs that expereience different traumas like life after a family member self harms or commits suicide, suffering depression, being in rehab, living with abusive/controling family.

Coral starts off in the ocean but runs away after her sister dies in Red Tide. Everyone blames her sister's death on catching feelings because mermaids aren't supposed to have them. Coral's sister fell in love with a prince who ended up not loving her back so she goes on a mission to find the guy that broke her sister's heart with the help of Merrick.

Brooke suffers from depression. Its something she can't just get over. She's even tried rehab facilities that specialize in this topic. From her POV she is very distrusting and makes a friend who tells her she's not nothing... and I love that.

Merrick is hiding out with his sister away from his abusive father when he meets Coral. In an attempt to have a somewhat normal life he agrees to help Coral on her mission.

ocean off a port city and San Francisco.  Present Day

Sara Ella tackles sensitive topics in a genuine way. My daughter was a cutter for a couple of years. and it was hard on me to talk to her. She was in counseling but wanted to feel in control and so self harm to her was better than the pain she was feeling as a teenager being bullied. While reading Coral it made me feel less alone and normal. How do you protect someone from themself when they don't want saved?

Coral did lose her voice but she was on a mission navigating a foreign place and developing feelings for a boy. That made her feel guilty about moving on from grief temporarily despite knowing better from her older sister.

Recommend To – I know I'm probably not describing this in a flattering way but I really feel like this should be a required read in middle school or high school. Its really good.

based off Goodreads' ratings

Coral by Sara Ella
My rating: 5 of 5 stars

This is a dark Little Mermaid retelling that covers tough topics

View all my reviews

Disclosure: This book was provided to me at no cost. Whether positive or negative, my blog review is my own and may differ from others opinions. This review is simply a compilation of my thoughts and opinions of this book.  If you have any questions, just post them and I'll be happy to answer as best as I can. This disclosure is in accordance with the Federal Trade Commission 16 CFR, Part 255: “Guides Concerning the Use of Endorsements and Testimonials in Advertising.”

Posted by Angela Walker's Reviews at 12:00 AM No comments: Links to this post