A Paradox of Fates GIVEAWAY 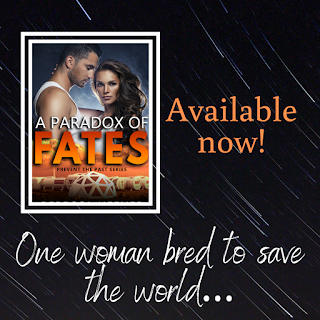 A Paradox of Fates 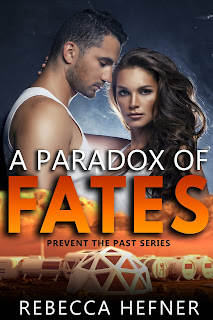 One woman bred to save the world…

Dr. Elaine “Lainey” Randolph was born with one sole purpose: to prevent the past. With her brilliant mind and unwavering spirit, she works tirelessly to solve the equations that will finally unlock the mystery of time travel. Then, she will leave the post-apocalyptic future her grandfather created and travel back in time to prevent his calamitous actions.

When handsome military captain Hunter Rhodes appears at Lainey’s remote scientific hub, he offers her protection. But there are strings attached to the mysterious soldier’s proffer, and Lainey finds herself wary of the man who stokes unwelcome longing and desire in her unemotional heart. For Lainey is a scientist, obdurate and dispassionate toward the notion of romantic love.

As Lainey’s band of ragtag scientists and loyal soldiers endeavor to escape the dystopian future, the evil New Establishment threatens to destroy them all. In their unpredictable timeline, the nefarious regime has become all-powerful and will stop at nothing to ensure complete world domination…

This novel is brought to you by a self-proclaimed science dork and lover of romance, fantasy and sci-fi. The reader can expect time travel shenanigans, smokin' hot chemistry between main characters in their late 30's and 40's and twists along the way. Enjoy the journey!

Rebecca Hefner grew up in Western NC and now calls the Hudson River of NYC home. In her youth, she would sneak into her mother's bedroom and raid the bookshelf, falling in love with the stories of Sandra Brown, Nora Roberts and other authors of that era. Years later, that love of a good romance, with lots of great characters and conflicts, has extended to her other favorite authors such as JR Ward and Lisa Kleypas. Also a huge Game of Thrones and Star Wars fan, she loves an epic fantasy and a surprise twist (Luke, he IS your father).

Rebecca published her first book in November of 2018. Before that, she had an extensive twelve-year medical device sales career, where she fought to shatter the glass ceiling in a Corporate America world dominated by men. After saving up for years, she left her established career to follow the long, winding and scary path of becoming a full-time author.

“Shhh…”  Hunter smoothed the pads of his fingers along her wet cheek, drying her tears as his silver gaze bore into her.  “You’re right where you need to be.  I told you, I believe in fate, Lainey.  I don’t know how, but there has to be a reason for all of this.”

“Then I’ll believe for you.”

The words lingered between them, spoken in his deep timbre, and the dull thud of Lainey’s pulse pounded through her veins as it always did in his presence.  They stood frozen except for their breathing, eyes locked as their hearts beat in tandem.

She lifted her hand, sliding it over the stubble on his cheek.  His eyes closed as he whispered her name.

“Why does it feel this way with you?”

His lids opened slowly, and his eyebrows drew together slightly.  “What way?” he murmured.

“Like I just ran a marathon and I’ll never catch my breath.”

“I think that’s called chemistry, duchess.  You should be an expert in that.” 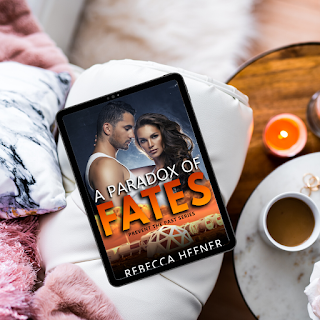 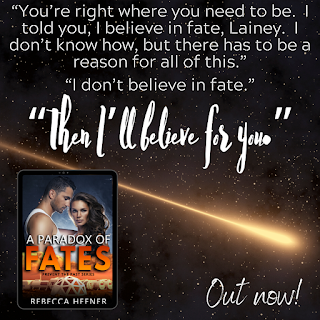 Three lucky winners will win e-copies of A PARADOX OF FATES. Must be 18 to enter; open internationally!

Email ThisBlogThis!Share to TwitterShare to FacebookShare to Pinterest
Labels: a novel take pr, A Paradox of Fates, Prevent the Past, Reading Goddess Press, Rebecca Hefner